The Lagotto Romagnolo (pronounced La-go-toh Roman-yolo) is a dog with a rich history behind it and is one of Italy’s oldest known dog breeds.

The Lagotto Romagnolo is a rural dog with its ancestry reaching far back into Italian history. It is an ancient breed which has miraculously survived until today. Archeological sites located primarily in Northwest Italy, indicate the Lagotto evolved from a breed of small water dogs with curly hair. 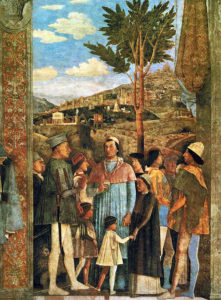 Since Etruscan times (7th Century BCE) a little breed of duck retriever has existed as a distinct type of dog in the vast marshlands of Romagna in north-eastern Italy. It is believed to have descended from the 16th century in Italy, specifically in the lowlands of Comacchio and the marshlands of Ravenna. For centuries the Lagotto was used to help hunt waterfowl but when large-scale draining of the marshland started towards the end of the nineteenth century, the age-old function of the Lagotto started to change. The vast flocks of waterfowl disappeared and the Romagnolo increasingly used their dogs for searching for the much prized and very valuable underground tuber known as a truffle. The evidence primarily locates the Lagotto along the East coast of the Italian peninsula, raging from Ravenna in the South, through Comacchio, the Venice lowlands, and North to Friuli and the Istria cape.

A fresco by Andrea Mantegna dating to 1456, located in the wedding chamber of Ducal Palace in Mantova, depicts a dog identical to today’s Lagotto laying at the feet of Marquis Ludovic III Gonzaga. Post 16th century we continue to find descriptions and drawings of hairy dogs in literature. Thanks to its thick, hairy coat, the Lagotto was able to spend hours in the water in any weather conditions. The name Lagotto derives from the dog’s original purpose. In the local Romagna dialect “Cán lagót” mean

By 1920, the Lagotto was known in Romagnolo Apennines, Valle del Senio, and Valle del lamone, however principally in Valle di Santerno. Despite this renown, there was little interest in establishing the dog as a pure breed. As late as the 1970s, a group of Romagnan enthusiast (Quintino Toschi, Prof. Francesco Ballotta, Dr. Antonio Morsiani, and Lodovico Babini) decided to establish this dog as a recognized breed. In 1988 they established C.I.L (Club Italiano Lagotto). In 1995 after many long years of work, the breed was officially recognized by the F.C.I. Today the Lagotto breed is very popular abroad. There is rapid growth in the number of Lagotto puppies in Great Britain, the USA, Switzerland, Finland, Sweden, and the Netherlands. 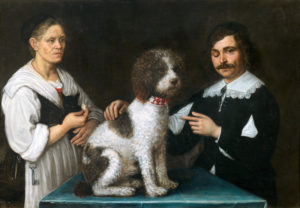 Another painting from the 1600s shows an almost perfectly conformed Lagotto as the subject of a painting by "il Guercino" Giovanni Francesco Barbieri.

Since 1997, the U.M.L.AG. (World Union of Lagottos Clubs) has overseen all international Lagotto clubs.